Broadway star Kristin Chenoweth was the featured headliner at the Festival Napa Valley Arts for All Gala, one of the many incredible festivities this summer.

Festival Napa Valley recently “uncorked” its 13th season. I made my annual pilgrimage, one of a delighted 10,000 attendees who enjoyed wine, food, and cultural events over ten days at different venues throughout the Valley’s Wine Country.

Continuing my coverage of the Festival’s opening weekend, this week I share two fabulous gala-style events I attended.

The internationally recognized Festival Napa Valley gets better and more popular each year, with waiting lists for many of the 2018 programs. Bravo to all involved!

The patron dinner at historic Trefethen Family Vineyards was a Festival highlight and a landmark occasion celebrating Trefethen’s 50th anniversary.

Trefethen, which pioneered the idea of cross-promoting wine and food in the 1970s, offered a bounty of local delicacies and award-winning wines. The legendary Cuban band Grupo Compay Segundo performed, and an after-party lasted until the wee hours.

One of the largest private wine land holdings in Napa Valley, Trefethen Winery is still owned by the family rather than a brand conglomerate.

This year marked the 50th anniversary of Trefethen wines, though the winery itself is more than 130 years old.

Trefethen Family Vineyards is one of Napa Valley’s most historic wineries. Originally constructed in 1886 by a Scottish sea captain who designed several wineries, it was named “Eshcol” after the Biblical valley where grapes were grown.

In 1968, the first generation of Trefethen wine makers, Eugene and Catherine, purchased Eshcol and six adjoining properties to create Trefethen Family Vineyards. The winery had fallen into serious disrepair, but after years of careful research and work, the couple’s son John and his wife Janet restored it to its former glory.

Trefethen is Napa’s only wooden, gravity-flow winery that has survived from the 19th century. The wine is made from Trefethen’s own grapes, never purchased from other growers.

Built in 1886, Trefethen’s distinctive pumpkin-colored structure—listed on the National Register of Historic Places—is made of redwood rather than stone.

The Wine Olympics win boosted the image of the Trefethen winery and helped elevate the status of California wines in the world’s eyes.

Since the patron dinner was my first trip to Trefethen, I was eager to see the winery. As the evening began, between sips of estate wines, I looked around at the vineyards, pool, and lush garden. The expansive size and beauty of the property amazed me.

Guests arriving to the historical winery were serenaded by musicians throughout the property.

Festival donors Pepper and Michael Jackson, who also have a home in Palm Beach, with Elizabeth Moffitt.

PASSING THE BATON TO THE THIRD GENERATION

In his welcoming speech, Trefethen patriarch John announced he and his wife Janet were passing the baton to their children Lorenzo and Hailey, who currently run the operations.

The winery was passed to John and Janet in the 1970s by John’s parents Eugene and Catherine Trefethen, the winery’s founders. Now a third generation is continuing the family credo: “One Family, One Estate, One Passion.”

Who hasn’t heard of Buena Vista Social Club? The 1997 album, performed by an ensemble of Cuban musicians, revived the music of pre-revolutionary Cuba. One of the ensemble members was the late Compay Segundo, leader of the band Compay Segundo y sus Muchachos and inventor of the seven-stringed, guitar-like armónico.

“It’s that rhythm that excites people,” Salvador Repilado told us. “It makes you get up and dance and feel good.”

By the end of the performance, just about everyone was in the aisles dancing and jumping!

After the performance, many local young friends and wine-lovers enjoyed an after-party with open bar and food stations and stayed late to continue celebrating this special anniversary.

THE ARTS FOR ALL GALA AT HALL ST. HELENA

It was no surprise that the 2018 annual Arts for All Gala raised a whopping $2.5 million, thanks to the presence of headliner and Tony- and Emmy-winner Kristen Chenoweth, and to a dozen once-in-a-lifetime auction experiences on the block.

Guests of the Arts for All Gala were greeted by silvery goddesses on stilts, starting the evening off with some fun.

The venue for the Gala was at HALL St. Helena Winery, owned by Kathryn and Craig Hall. The former Ambassador to Austria, Kathryn Hall grew up working in her family’s Mendocino vineyards, and has realized her long-held dream of opening a winery that celebrates both fine wine and fine art.

The philanthropical Craig and Kathryn Hall split their time between Napa and Dallas, where Craig is also a top real estate developer.

A LIVELY PERFORMANCE FROM THE QUEEN OF BROADWAY

The highlight of the evening was Kristin Chenoweth’s high-voltage performance. Through my involvement with the New York Drama League, I’ve had the pleasure of seeing her onstage several times. 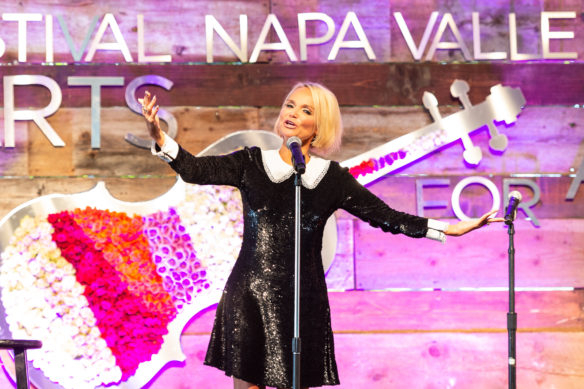 Chenoweth is delightful; her infectious personality and talent that have taken her from a small Oklahoma town to a marquee presence on Broadway.

A group of vocal arts students selected from Napa County public high schools joined Kristin Chenoweth on stage to perform at the end of the program.

CHEERS TO THE ARTS!

The evening was a colorful delight, from the performances to the food and décor.

Jerry Grodsky and Roberta Sherman, who is a member of the Seattle Art Museum Board of Trustees.

After the musical performances, guests bid on a dozen enticing auction experiences, including Kentucky Derby tickets in the Jet luxury suite, accompanied by breakfast by Chef Bobby Flay; three nights in Italy’s Monteverdi Tuscany village, with a dinner at singer Andrea Bocelli’s home; and a dinner with actress Sophia Loren in Geneva, Italy.

The dinners with legendary singer Andrea Bocelli and actress Sophia Loren were among the most coveted auction items.

Luxury realtor Olivia Decker and Maria Castellucci cheered on her father Antonio Castellucci as he placed a bid.

After the auction and dining, guests enjoyed a lively after-party in the winery, where more libations were poured.

It wouldn’t be a party without props and a photo booth!

It was another unforgettable night in Napa Valley provided by the Festival.

Being a guest in the historic Ink House during the Festival Napa Valley made the trip even more special. Staying there is like having your own private house in Napa while enjoying impeccable service.

Originally named the Hilios Ranch when it was built in 1885 by Napa Valley pioneer Theron H. Ink, the property is listed on the National Register of Historic Places.

For 130 years, Ink House has been a prominent fixture on the famed Highway 29 that meanders through Wine Country.

The Castelluccis enlisted architect Howard Backen to gut and replace the Ink House interiors that had seen many previous reincarnations, lastly being split into 13 small rooms.

The interiors weren’t the only thing that got a facelift—the grounds were also beautifully renovated.

With an Italian family at the helm, naturally the property now offers a bocce court.

Today, the two-story Ink House has been renovated in a clean, fresh style suiting modern sensibilities, with luxurious appointments and brand-new baths.

Breakfast is served daily, but if guests want to prepare a bite to eat, the “open access” kitchen also offers a fully-stocked pantry of first-rate ingredients.

With the feeling of a private residence in Wine Country, and offering large and well-appointed rooms, Ink House is a perfect place to rent with a group of friends. More luxurious and better than an Air B&B, here you have staff to take care of every little detail, from preparing breakfast, to making all your itinerary arrangements, and even driving you around Napa Valley in a Rolls Royce so you can visit wineries without worry.

One room has been named for Elvis Presley, who made the inn his home during the filming of Wild in the Country in 1960.

Decorated in mid-century Hollywood style, the Elvis Room pays homage to the King with accessories that include movie posters and black and white photographs.

The Theron Room is done in warm leathers and natural textures inspired by the independent and adventurous spirit of the Inn’s original owner.

The Helios Room blends the old and new, with a private, north-facing portico and a cozy four-poster bed that make it feel like a home of one’s own.

On the top floor is the “Ink Well,” a widow’s watch ideal for reading quietly or enjoying regional wine with friends.

From the Ink Well, guests are treated to 360-degree views of Napa Valley and the mountains beyond.

I was so disappointed at having to leave before the ten-day festival was over (and to return to a gloomy, rainy New York besides!). Just some of what I missed:

Over the years, the Festival has introduced me (and thousands of others) to artists, local vintners, and wineries that aren’t on the tourist route maps. I’ve loved having an insider’s view of the California wine country lifestyle.

LINKS TO OTHER POSTS IN THIS SERIES